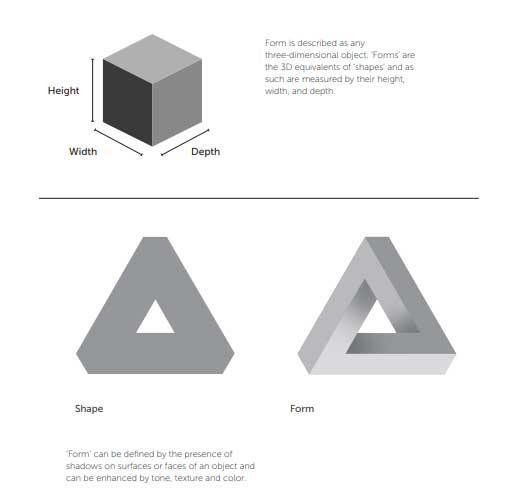 Form is described as any three-dimensional object and ypography is one of the most commonly used elements in graphic design.

Form is described as any three-dimensional object. Forms are the 3D equivalents of shapes and as such are measured by their height, width and depth. Form can be illustrated or constructed and can be defined by the presence of shadows on services or faces of an object and can be enhanced by tone, texture and colour.


Form adds visual dimension and can be stimulating and engaging to the eye because it adds realism and depth that draws you in. Form adds a 3D quality that can trigger sensations of touch, rough, smooth, hard soft, hot or cold, round or pointy. Because of this visual dynamic form can be used to create a distinct look and feel to a piece of graphic design work.

So in design there are two types of form: Geometric and organic.


Typography is one of the most commonly used elements in graphic design. Type is the most direct way to communicate visually typically set either as headers or in paragraphs. A single letter in a typeface is a combination of geometric and organic shapes which combined together to create a larger shape in this case the letter R.


This unique letter shape is an entity and is part of a complete typeface made of other letter shapes. The characteristics of every typeface can be broken down into what is known in design as the anatomy of type.

It's the type of shapes given to the anatomy of type in each letter that gives the typeface its distinct look and feel. Type is not simply about communicating words, words are important but what can be equally as important is the style of those words the typeface and the way they are arranged on a page.

Typefaces can be part of a family of various weights which can be used to express various tones or create visual hierarchy in the design. Typefaces are like voices with accents and dialects which have their own distinct pronunciations and characters.

Typefaces don't just communicate literally they communicate visually for this reason the choice of typeface used in the design is crucial to set the intended look and feel, set a tone and add character to a piece of work.


Typefaces have evolved over time, the first type faces were designed to be practical cut out of wooden blocks or cast in lead to work in a print press for mass production. Others have originated from various design movements but what they all have in common is that they have all been created to fulfil a particular purpose and express a particular look and feel.

Today there are many categories of typefaces such as serif, sans serif, slab serif, rounded, script, blackletter, decorative and abstract to name a few with some sharing characteristics of various categories.

Design throughout history has celebrated the shape and form of type and has shown us that type can be both functional and decorative. The way type has been arranged and the relationship given to it to other elements in compositions has redefined the use of type in design.

The first set of examples showcase functional uses of type all of these examples are used to inform and deliver a clear message. The first example is a basic use of type justified and placed simply on a page as one block this has a traditional feel with the use of its serif font.

The next two examples take the previous technique further add more dynamics with more complex compositions, the examples show type in columns and some type of elements have been increased and used in capitals to add contrast.

In the second example we have a mixture of type weights applied to the header and sub headers to create contrast and hierarchy, negative space has been considered to create structure and allow some type element to stand out. We also see some line elements that have been used to reinforce the visual structure and layout with the headers and sub headers are used the next example is simple yet dynamic, here we have a clean bold header with justified type below in a block at a unique angle. Overall this creates a nice contrast with direction and movement on the page.

The next example is simple and bold, here we have a decorative font used for what could be a title or header of a magazine or booklet. Under this we have a bold message capped into a space sealed with two line bars top and bottom the type has been carefully scaled to meet the same width of the top and bottom line bar. Overall this feels bold rigid and strong, assertive.

In the last example we have a serif font with thick spines, thin cross bars with exaggerated serifs this font feels quite classy and boutique this has been used here in an interesting layout. Here we have some larger line type to the top which defines the column widths of the type below the smaller type runs alined left to each word in the larger type.


Here the contrast is not only in size but also in alignment which creates an overall dynamic layout. So even though there are some creative aspects to these compositions it is not enough to distract from the overall message they only serve to complement and add sophistication to the message.

So the second set of examples showcase more creative uses of type. All of these examples are used to inform but the priority is placed more on the creative aspect of the look and feel.

So the first examples show how print block letters have been carefully chosen and arranged to look like a face. Here not only are we looking at the type but also the shape and form and texture of the print blocks.

In the next example we have 3D degenerated type unlike the functional 2D examples we have added form, shadow, perspective and depth to add visual factors which add dimension. In the next example all emphasis is focused on the craft of the type we are encouraged to see this as a piece of design art.

So the next examples test the limits of order, alignment, legibility and contrast here a lot of words pop out to us in no particular order. Due to the lack of order and focus the types begin to merge together into an overall texture and shape on the page.

The next two examples take this to the next level here we have almost no legibility of message to the point we stop looking for legibility but get immersed in the hypnotic shapes.

These type compositions have become image textures and now we feel them as opposed to reading them. So from a practical use to a more creative use. In design type can be used to communicate literally and to tantalise the visual senses to engage emotionally.