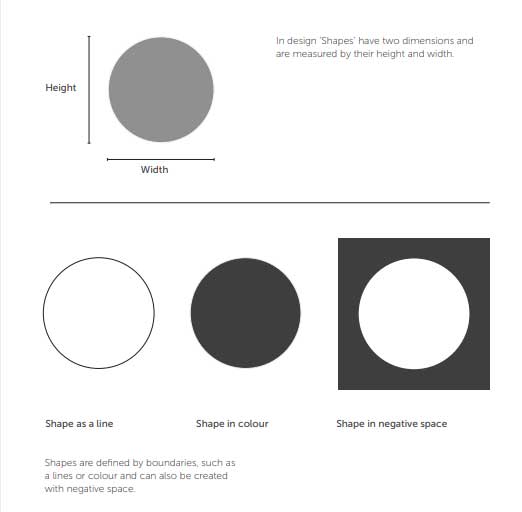 Everything is ultimately a shape. All objects are composed of shapes and all visual elements are shapes in some way.

Everything is ultimately a shape. All objects are composed of shapes and all visual elements are shapes in some way. In design shapes have two dimensions and are measured by their height and width.

Shapes are defined by boundaries such as with lines or colour and can also be created with negative space. Shapes are used to add interest and substance to a piece of graphic design work, they can be used to decorate they can be symbolic and can be used to create patterns and textures.


Now there are two types of shape: Geometric and organic.

Organic shapes weather simple or complex produce a natural feel. Now it's important to keep in mind that shapes our signal visual elements.

In design when we begin to place shapes together we create a relationship between them. However simple or complex it's this relationship between shapes that can trigger feelings, convey messages, engage an audience, add emphasis to a portion of a layout and create movement. When we group or move shapes closer or further apart we are applying the design principle 'Proximity'.


So in design geometric and organic shapes can combine together on many levels to create various design elements we use to communicate One example of this is with brand logos. In logos shape is used in its purest form.


Keep in mind that proximity is playing a crucial role here in the logos that are made with few shapes. If we were to move some of the shapes further away or closer they would have an entirely different look and feel. So here shape is used as a symbol.

Which build together to create a larger shape in this case the letter 'R'. We learned from a young age that this shape the letter R has a meaning. When combined with other shapes, for example the rest of the alphabet to form words it is giving a new meaning and when combined with a sequence of words we can form a sentence to pass on a message.

No where in design is shape used more literally to communicate visually than in typography. It's the type of shapes that combine together that give the typeface its distinct look and feel. Here shape is again being used as a symbol.

Here I have some more examples of how shape is used in design.


In this first example we have a group of text and a geometric shape in close proximity Now this may look simple but when you think about it here we have a group of texts which is made of hundreds of shapes carefully arranged in half a circle and next to it we have a single solid shape as another half circle. Overall on this page we see a circle shape even though there is no circle shape at all anywhere on this page.

It's the careful arrangement of the type and the solid shape in close proximity that suggests the shape of a circle. In design shape is indeed an individual element, but as a group shapes conform compositions like this and as such be treated as a visual element. Here shape is being used to create an overall composition to create the shape.

This can be seen in another example, here we have a page with a number of random shapes. Now if these shapes were scattered we would just have a page of individual shapes. But arranged any particular way with the right proximity we start to see another shape, the number three. Here shape is being used to decorate to build, illustrate and hint at another shape on the page.

Next is an example of how shape can form a recognisable image as an illustration. Now this image is made only of polygon shapes. It's the colour, size and position of each and every polygon shape that gives it an appernce to look like a Roman statue.

Now if we were to separate each shape from each other even a little bit it would no longer look like a Roman statue. This shows how proximity is crucial to represent or communicate in a composition. In this next example shape is used to create something entirely different.


Here we have a number of shapes that appear to be scattered in no particular order. We can see what looks like positive and negative spaces along with other shapes. Its appearance is random and all the shapes seem to blend into each other.

There is nothing legible hear that stands out only an overall look and feel. Here shape is being used to create a surface image texture. So in this last example unlike the randomness of the image texture here we have what looks like a regular repeating sequence of shape this is similar to the image texture in that nothing particular stands out.

Here shape is being used to create a surface pattern texture. So shape is what makes up the foundation of any composition. A layout can be simple made of one or few shapes or complex made by groups of many individual shapes. In design shape can be used in many ways, it's how they are arranged that determines the visual outcome.

When creating a composition you must always consider how the visual elements of your design are creating shapes, how the shapes interact and work together to present and communicate the intended message.